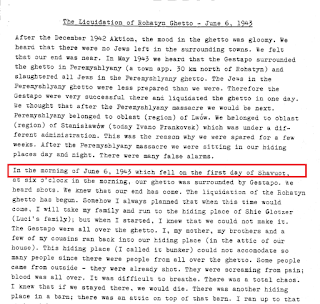 Why does one chooses to spend his Shavuot holiday in a far away land, in a small and unwelcoming town, with people that he hardly knows??

In 2010 , when I found myself leading a small "mission", including my mom and my two older kids , to Poland - we came to the site of the Belzec extermination camp, which is not on the "usual path״ of the Israelis who visit Poland.
We knew that most likely - some of our many missing branches - were buried there or in Rohatyn's mass graves...

The rustic sign on the entrance wall said : March 17, 1942.
We had no idea that was the date of the first transport to Belzec.

I am re - reading jack (Kuba) Glotzer's account of his crazy survival from the Rohatyn ghetto, as I prepare for my unexplained trip.

Marking the mass graves? Surveying them? Why? and why do I feel that I have to be there??

Seating in Ben Gurion airport, waiting for my flight to Lwow, I get to the chapter where Jack describes the day of the final liquidation of the Rohatyn ghetto, when he sees both his mother and brother being murdered by the Nazis.
It was on the day of the Shavuot holiday of 1943...*

So, for me - that was the reason. No more questions Asked.

My grandfather's father, three sisters, three brother in laws and quite a few nieces and nephews are probably buried in the Northern mass graves, from the last Aktion in Shavuot of 1943, unless they were on one of the trains sent from the Ghetto to Belzec.
We know nothing about his other sister, her husband, and daughter who lived in Lwow. We know nothing about my grandmother's sister with her husband and four kids who lived in Chodorov before the war. They all vanished without a trace.


*
June 6, 1943 was not the First day of Shavuoth.
June 9 was Shavuoth.
Jay suggests that this Aktion might have ended on Shavuoth.
Posted by Ruthy No comments:

The southern mass grave in Rohatyn is from the first Aktion, when only the Rohatyn Jews were in town  (in the ghetto). My grandmother's aunt and uncle and cousins, who lived in Rohatyn, are probably buried there (Mauer-Goldschlag).

After this first Aktion, the ghetto was free to receive new tenants, and this is when Jews were brought from all the surrounding villages ( including my grandfathet's family from Knyhinicze).

Since this is the day of Shavuoth it's not surprising that I "happen" to be assigned to join the archaeologists  who are working in the northern sight (with Sophia as a translator on my side).

The greenhouses were the first to be surveyed. Rustic decaying structures with an empty house behind them.
My job was to help clean the area from trash and cut some branches that will enable the machine to work smoothly. Sophia helped as well. 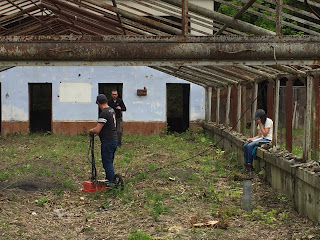 The area is adjacent to the outer houses of the town, a short walk from the center (Rynek).
There are some tractors parked and a lot of garbage too.
People work here on a daily basis, in some small businesses related to building materials.

After lunch we had some local visitors, people that work and live in the area.
They took us to the area behind the house that's behind the green houses and told us that 15 years ago, they brought a bulldozer to dig some clay for brick manufacturing, but they found many skulls and human hair and covered it back immediately. They also told us about a guy that had to dig  some holes for foundation to a building there, with similar results. The man swore he will not touch this area again.


I find some human bones on he surface (which are taken for inspection and than buried). This "find" while cleaning the area behind the greenhouses, after hearing the descriptions of the locals earlier, in the shadowy patch of land on Shavuoth - was one of the difficult moments for me on this trip.


The next sight to be surveyed was this area that they showed us...

A strange moment was when the locals mentioned Jews from other villages that were brought to Rohatyn ghetto and I turned around to show them the list of villages on my Rohatyn group t- shirt.
For a few moments I stood there and I could only hear them when they were reading the names they were familiar with,  pointing at my back...


Posted by Ruthy No comments:

An easy (late) start this morning.
Marla was invited to speak to English high school students in "Gymnasium number 1" in Rohatyn.
She suggested that I talk to them as well.
In the hotel, the previous night, I adjusted a slide show ( thank you google drive!) that I presented to some students back home on Geneology - to the expected audience , not knowing if I will have internet in the school or not.
Lucky for me, I was able to connect their computer to the internet via a hotspot on my iPhone (definitely worth what I paid my cellular provider for this "package" ...).
I was able to download it and present it, which still amazes me, especially in a place which seems to be so far behind in so many aspects (like doing everything manually in the fields just like it was done for generations and generations).
There were more than 30 students with three teachers and one American peace corps volunteer. They were quiet and respectful (Even though they probably didn't understand all that was said, especially when I talked with my Israeli accent).
We had a very warm welcome and a very warm goodbye from both the teachers and the students, and that was a great change from what you see in the stores and in the streets: very little smiling...
Marla showed us around and took us to where the Jewish Ghetto was (before it was burnt in the final liquidation), the Jewish quarter, the surviving synagogue (that stands deserted), and the gestapo headquarter whose parking lot was paved with Jewish Headstones.

We left Rohatyn after dropping Marla off at the north site and headed toward Narayev, where my grandmother and my two uncles were born. The roads are not in great shape but the scenery is beautiful and many stork nests with full occupancy can be spotted on the way. 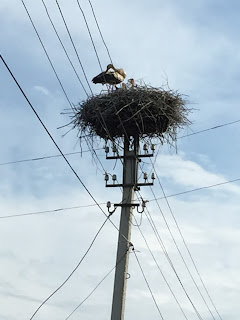 In Narayev we started in the "city hall", where the secretaries know nothing about the names that I ask about, or the prewar map or anything else from that prewar era...
The mayor gets out of another office while we are there and he promises that a book with info and photos from that "era" is coming out in a month, including Jewish photos.
Of course I leave them my address and hope they will contact me when that book is available for purchase.

We walk around the village for a while, Sophia and Oleh try to ask some older people about the "Hebrews". 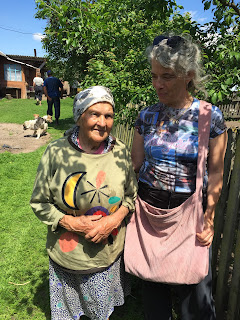 One welcoming family brings grandma (86) from the fields and she talks to us for a while. She gets very emotional when she tells us of a Jewish family that was locked by the owner of their hiding place (cellar) and were later buried by him and how the same man suffered before he died.
The family claims that some Jewish tombstones are in the cemetery but we couldn't find them.

At one point I find myself crossing this very large cemetery back and forth, hoping to spot just one Hebrew letter, or any other sign that will shout to the world: "You see? There really were 700 of us here in this village - just before it became "Judenrein" (clean of Jews) !!!"

But nothing is left.

My plan was to continue to Knyhinicze, my grandfather's village. Somehow I feel too tired for another search in vain, I prefer to go back to Rohatyn, where we meet the group surveying the new Jewish cemetery that was robbed of some of its tombstones, but some very heavy ones are still there...

We don't know for sure if there is a mass grave here, but some rumors say that there is one here as well.

Marla and Jay treat all of us to our last dinner in Rohatyn, the pizza is very good and it goes very good together with  the Lvivsky beer.

Posted by Ruthy No comments:

Before heading towards Lwow, I spend a few hours with the group at the South site. the memorial that was erected here in 1998 is identical to the one at the north site. But it's the only similarity. As much as the north site looks and feels creepy, the south site looks like it was taken fro "The sound of music". Serene lush green hills all around, with wheat fields and small farm houses close to the horizon. Perfect weather, sunny with very pleasant breeze...

Even the sanded area that covers what seems to be some looting area where bones and such were exposed - looks completely innocent to a bystander.
Again, a local arrives with stories that he heard from his grandmother about where the Jews were led to and where they were killed and also how the locals went behind them and tried to save the children...


When the survey is complete, Jay and Dante take some group photos, and Oleh picks up some of us early to the airport.
On the way to the airport, we stop at the Rynek ( Rohatyn's central square) and buy some local sausage. Here we are greeted by a nice lady that stands in front of us in the line and helps us choose the best sausage ( in English, and with a smile!). Oleh is with us as well, and that helps finalize the transaction.
Right next to it we get a danish from the bakery, and then we are ready for the ride back to Lwow.

The airport is new and modern and busy (built for the 2012 World Cup as Dante mentions) , which is completely detached from the farmers working in the fields with minimal tools or with bear hands right next to the surveyors, earlier this morning.
Posted by Ruthy No comments: